Dorothy Whipple gets her plaque! 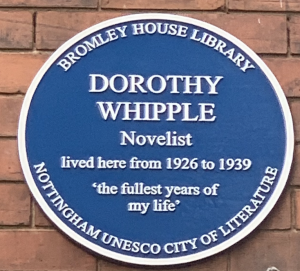 A few years ago Rowena Edlin-White posted a faux blue plaque  outside Dorothy Whipple’s one time home in Ebers Road in Mapperley Park. Rowena has researched Whipple’s life and writing and has often spoken and written about her.  Some years down the line and largely thanks to  Whipple enthusiast Helen Lewis, who with the help of Bromley House Library and NWHG set up a Crowdfunding bid to place a blue plaque on the house. The owners were more than happy to allow this and many people chipped in including a number of NWHG members.

On Saturday 26th September a group of six people unveiled the plaque with one or two on-lookers from across the street. It wasn’t quite the event hoped for to celebrate Dorothy’s achievements but the plaque is now up for all to see and maybe there will be a celebration at some future date.

Dorothy was a much-loved novelist in the inter-war years and two of her books were made into films – They Knew Mr Knight and They Were sisters. She wrote about ordinary lives but with subtly feminist themes of women striving for independence.  J B Priestley called her the Jane Austen of the twentieth century. Her writing went out of fashion after her death but there has been a resurgence of interest in her books and Persephone Books have republished all of her novels.

Dorothy was born in Blackburn in 1893 and came to Nottingham after her marriage. It was from the house in Ebers Road that her first novel Young Anne was written and by the time she left in 1939 six more novels had been published. She loved her time in Ebers Road saying ‘I felt miserable … parting with this house where I have been so happy, so much has happened to me during the fourteen years I have lived in it. These have been, I am sure, the fullest years of my life.’