NWHG  were very pleased to work with many other women’s organisations and the City Council, led by Councillor Rebecca Langton, to plan a celebratory event on International Women’s Day 8th March 2020.

As part of this and in particular to celebrate 100 years since the first women City Councillors, Helena Brownsword
Dowson and Caroline Harper; were both elected in 1920 – NWHG suggested a plaque be installed on the Council House to celebrate this. The unveiling took place on Friday 6 March ready for the IWD event on Sunday 8 March.

It was good to see Nadia Whittome MP proudly photographed by the plaque which celebrates her being the first BAME woman MP elected in 2019. 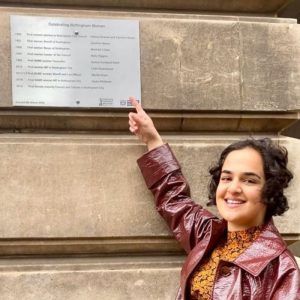 The Celebrating Nottingham Women /IWD event itself attracted over 500 women who visited the various stalls, saw the Mayor’s parlour and toured the building before enjoying free coffee and cake. NWHG’s display highlighted the women who were firsts in political offices, but also trailblazers in other fields such as medicine, science, computer programming, art and writing. It was a great day and hopefully one which will become an annual event.