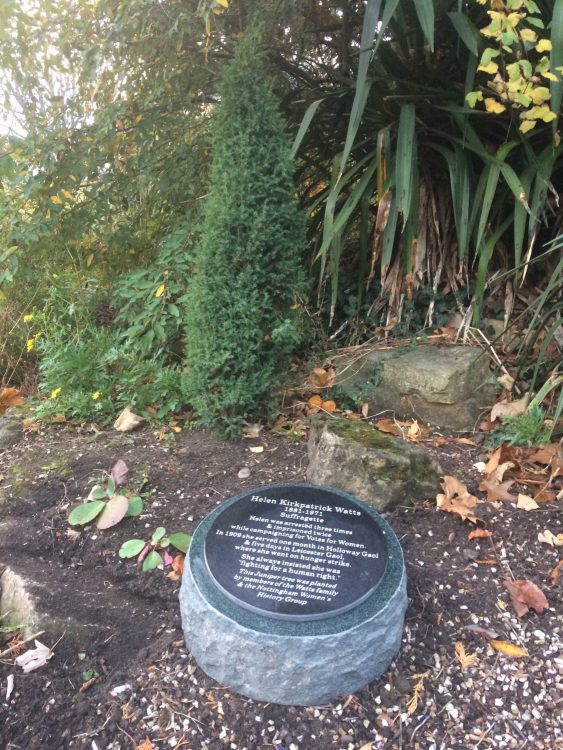 This was the first time, with one exception, that a plaque has been sited and dedicated to a woman in a public park in this city. The exception of course is Queen Victoria; there are several commemorative pieces around the city and her statue was relocated from the city centre to the Victoria Embankment memorial garden in 1953 as it was considered a hindrance to traffic.

In many ways the lack of publicly acknowledged commemorative plaques and statues to women in this city reflects the concept of ‘hindrance’ as there appears no appetite to redress the imbalance despite our best efforts and suggestions.

There are two blue plaques in the city to women. One is dedicated to Alma Reville (1899-1982) screen writer/film director and editor from St Ann’s who was married to Alfred Hitchcock, and the other to Constance Shacklock (1913-1999) the Sherwood born opera singer, whose dedicated plaque is in the foyer of the Royal Theatre, Nottingham.

Dame Laura Knight (1877-1970) the artist has a grey plaque with the council coat of arms on the top, on the house where she lived 9 Noel Street, overlooking the Forest recreation ground. In addition, there is a hexagonal plaque on 455 and 457 The Wells Road (two homes for poor people) erected in 1926 to the memory of Henrietta Carey (1844-1920). Henrietta was a social reformer and active in the suffrage campaign in Nottingham as a member of the NUWSS.

In recent years there has been some recognition of women around Nottingham outside these plaques. Trams and rooms at Nottingham Trent University have been named after women, Nottingham’s famous ice skater Jayne Torvill has a whole suburban street named after her in Aspley, and the nun Mary Potter a Health Centre in Radford.

We would argue that this is not enough. We want to see greater representation of women and their achievements in public spaces in the city. We will be continuing to campaign for plaques and the like in the coming years. One plaque we specifically want to see, is one on a public building which acknowledges the contribution of all the women who fought for the right of women to vote in Nottingham.

If Bristol, Leicester (with its statue to Alice Hawkins suffragette and trade unionist), Manchester (with the statue to Emmeline Pankhurst to be unveiled this coming week), and Birmingham (with its new blue plaque to Bertha Rylands in Birmingham Art Gallery) can do it, so can Nottingham.

The celebrations of some women gaining the vote in 1918 has drawn to a close, but it does not mark the end of women campaigning for the vote. Universal suffrage was only achieved in 1928 so we have a ten- year period to make a renewed attempt to have women commemorated.

You can read more about Nottingham’s Plaques and Statues in Terry Fry’s excellent booklet available in the tourist office and in local libraries.